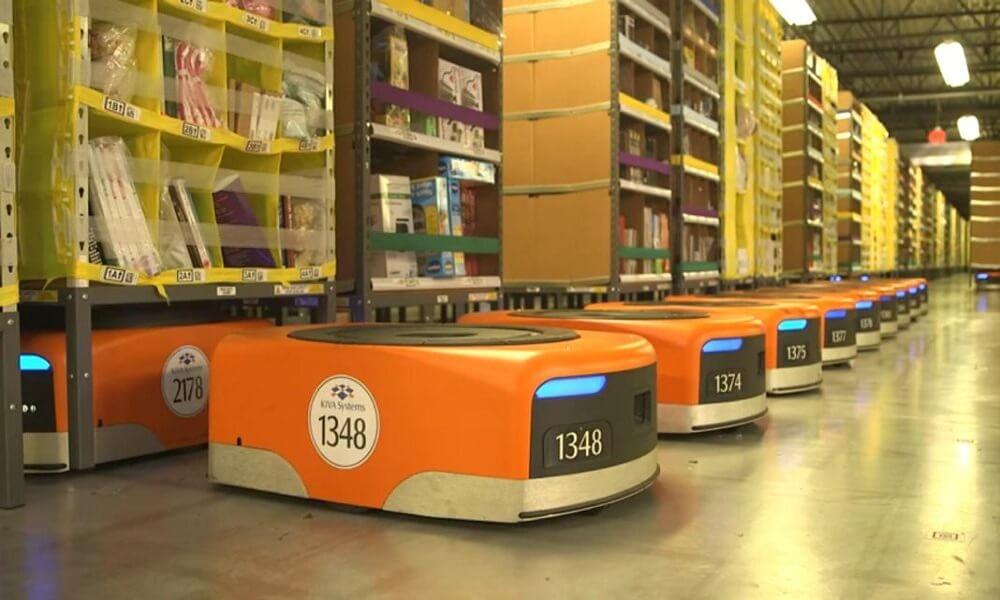 This famous robot’s three laws have many places to be scrutinized, but it is in line with human expectations for the future: when artificial intelligence robots and humans coexist, people occupy an unquestionable dominance.

However, in the industrial field where robots have been widely used, there has been a phenomenon that runs counter to this idea.

In 2012, Amazon acquired Kiva System for $775 million, which is known as a storage robot. Kiva System changed its name to Amazon Robotics.

Kiva is not the same as the one we think of. It’s like an enlarged version of the curling, with a tray on the top and a wheel on the bottom.

This seemingly inconspicuous robot has tremendous energy. Kiva relies on electric power to lift shelves up to 3,000 pounds (about 1.3 tons) and move autonomously in the warehouse according to remote commands to move the target shelves from the warehouse to the warehouse. In the worker handling area, the worker takes the parcel from the shelf and completes the final sorting, secondary sorting, packing and reviewing. After that, the Kiva robot will move the empty shelves back to their original position. When the battery is too low, Kiva will automatically return to the charging position to charge itself.

▲ Kiva robot working in the warehouse. Image courtesy of Quartz

Amazon has the world’s largest warehouse, and according to public data, Amazon’s warehouse and data center area was close to 200 million square feet (18.58 million square meters) by the end of 2017.

Kiva robots have also been used in major transshipment centers, and there are currently more than 100,000 Kiva in Amazon’s warehouses. They are like a group of hardworking workers who walk around and carry goods in the warehouse.

How to make “workers” not collide in the process of carrying shelves is one of the core technologies of Kiva System. For a long time, they are almost the only ones that can integrate complex hardware and software into a delicate robot. company of.

However, how to get Kiva robots and human employees to work together is a new problem.

In the process of carrying goods, Kiva will occasionally crash the robot or the sporadic out of the parcel from the shelf. At this time, human employees are needed to help. However, hundreds of Kivas around the work are a huge challenge for human workers.

In the past, when a robot malfunctioned and required manual assistance, the robotic engineer was required to divide the “event area” and set this area as a forbidden area in the robot’s travel route. After that, the staff could enter the field to deal with the problem.

Recently, Amazon proposed a new solution: the staff in the warehouse is equipped with a Robotic Tech Vest, and the vest has sensors for robot recognition. When put on, the warehouse staff can be recognized by the Kiva robot. It is.

With the robotic vest, the staff can come in at any time, and the Kiva robot will recognize humans from far away and update their route in real time, avoiding the staff.

Amazon said that in the past year, robotics vests have been introduced to 25 cities, and their applications are “very successful.”

How do robots and humans work together? Robot-centric

Will robots replace humans? In addition to Kiva, Amazon also uses robotic arms in the warehouse, which can take items from the shelves according to instructions, put them into plastic boxes, and put them on the belt. At the other end, the robotic arm that packs the goods puts the goods in the carton and prepares them for delivery to the customer. Currently, the robotic arm can only pick a standard size box.

▲ Image from: The New York Times

The robot can sleepless and maintain an accuracy of over 99%. Many aspects of the Amazon warehouse are automated.

After massively applying robots in the warehouse, Amazon began to face concerns from blue-collar workers and the government about robots robbing humans.

Will the robot replace humans? will not. The more robots are used in our warehouse, the more work stations are created. Because robots don’t build robots themselves, humans design, manufacture, apply, and help them. The most important thing is that people and robots work together to bring more growth, and growth means work.

From the current situation, Brady is not concealing the truth. According to The New York Times , as of 2017, since the introduction of Kiva robots, Amazon’s US warehouse has added 80,000 employees and more than 125,000 warehouse employees. Amazon also said that the company will continue to recruit people.

Employees who used to sort goods in warehouses have been trained as robot supervisors and “nanny”. Each employee looks after multiple robots at the same time. They want to ensure that the robot has something to move and repairs when the robot fails.

Human beings and robots have become collaborative relationships. In the process of collaboration, how to ensure human security has become the most basic and important requirement.

In December 2018, a serious accident occurred in Amazon’s warehouse. A robot pierced a can of a falling bear spray and released a large amount of concentrated capsaicin, which directly caused difficulty for nearby workers to breathe. The accident resulted in 24 employees being taken to the hospital, one of whom was seriously injured.

Amazon suffered sharp criticism at the time. How to make robots coexist peacefully with humans, especially to protect human safety, was re-discussed after the accident.

At present, there are three main directions for the study of robot safety : first, reduce the structural rigidity of the robot, so that the robot has good flexibility, which can effectively reduce the damage of robots and people in the event of accidental collision; second, let the robot With accurate and rapid environmental judgment and responsiveness, the main method is to add more sensors to the robot and write more intelligent control algorithms. Third, the intelligent compliant control system further establishes accurate mathematical models to achieve accurate Stiffness and interaction control.

After the bear spray incident, WIRED broke the news , this is not the first time Amazon’s robots have an accident. At least in 2015 and early 2018, similar things happened in the Amazon factory.

For Amazon, which has already applied robots on a large scale, how to ensure the safety of human workers in human-computer collaboration is a more worthwhile consideration in a low-cost, operational way.

Current mainstream research relies on materials science, sensor advancement, and the leapfrog development of artificial intelligence algorithms. And Amazon’s letting human employees wear sensor-equipped peripherals may bring a new idea: when it comes to coordinating robots and human actions, it can also be robot-led.